My mother never wants anyone to know her EXACT age, let’s just say she is qualified to get Senior Citizen discounts, she gave birth to me in 1953 and she was 27 years old at the time.  As they say, you do the math.  My mother retired after 22 years of owning her own staffing agency only 3 years ago. For someone her age, she is pretty tech-savvy and definitely tech-curious. She loves Facebook, email, and playing games on the computer. She joined LinkedIn, loves to sign up on websites and post comments and she wants to learn how to Twitter. About a year ago I opened up an iTunes account for her and handed over my old iPod. She has taken it on several cruises and plays it in the kitchen through the speaker device I gave her. Recently, I got an iPhone and she was really fascinated by all the stuff it can do-most particularly talking to “Siri”. My middle daughter decided she may be ready to graduate to an iPod Touch so she re-gifted “Memaw” her old one. We presented a brief tutorial, handed her a stylus to make the typing a bit easier and now she is off and running. The device has opened up another world for her to explore and learn and the fact that she is mastering a new technology has been a boon to her self-esteem.

My mother’s experience is nothing new to researchers who investigate aging and technology as well as the learning process unique to older adults.  The notion behind older adult learning theory is that immediate relevance and problem-solving are the biggest motivators for acquiring knowledge in an unfamiliar area.  It took a while but many senior citizens finally gave in and joined Facebook because communicating with their grandchildren was a very relevant priority in their lives. In fact, some of those grandkids had more patience than their parents and took the time to show their grandparents how to set up a profile page.  Who would have thought that helping Granny post her “status” would replace baking chocolate chip cookies as an inter-generational bonding activity? My favorite adult child teaching their parents how to navigate the tech world is Tech Savvy Daughter. Her family outgrew the need for her computer skills so now she kindly helps the rest of us! More senior centers and other areas where older adults gather have also gotten on board in terms of providing both computers and computer education programs. Companies like SeniorNet and Senior Surf are two that come to mind.

The need to problem-solve is an additional motivator for learning in later years. Knowing how to search the Internet for information in such areas as healthcare, travel arrangements and particularly Medicare questions is so important for seniors who want to remain independent. The issue of retaining independence as we age will certainly be enhanced by rapid technological advances in home monitoring and health devices. Products like Apple Interactive Care, Life Alert (“Help! I’ve fallen and I can’t get up”) and Philips Medication Dispensing Service have provided seniors living alone and their children at least some peace of mind.

But luckily (at least for now), my mother is very content using her iPod for pure entertainment. Rockin’ out to Frank Sinatra while she slings Angry Birds at those annoying little pigs. 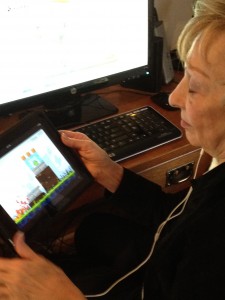 3 thoughts on “Tech and the Senior Girl”